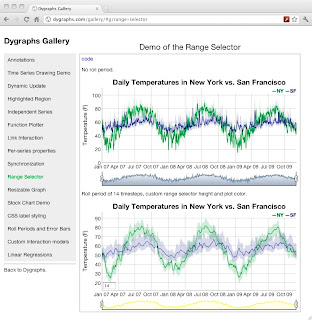 I'd like to introduce you to the new Dygraphs Gallery, which can be found at http://dygraphs.com/gallery. We've taken some of the existing tests, cleaned them up a bit, and put them into a single easy-to-use web application.

In 2009, Dygraphs' tests directory was used mostly for verifying that the code hadn't broken, by examining each 'test' one at a time. The list of tests grew to over seventy strong. With the advent of the Dygraphs automated test framework, the tests directory was less a home for validating behavior (which, anyway, became rather unwieldy with so many of them) and more of a showcase of what's possible in small, discrete packages.

So rather than have a series of independent files, we modeled the gallery after the GWT Showcase, including showing the code required to make the demo.
With the new Gallery, the old-fashioned Dygraphs tests face a different future, either being turned into Gallery demos, automated tests, or deleted outright.

The Dygraphs Gallery is brand new, and we have more demos and features to add. If you have any thoughts on the matter, don't hesitate to let us know on the mailing list, or, as always, contributions are welcome.
Posted by konberg at 7:19 PM